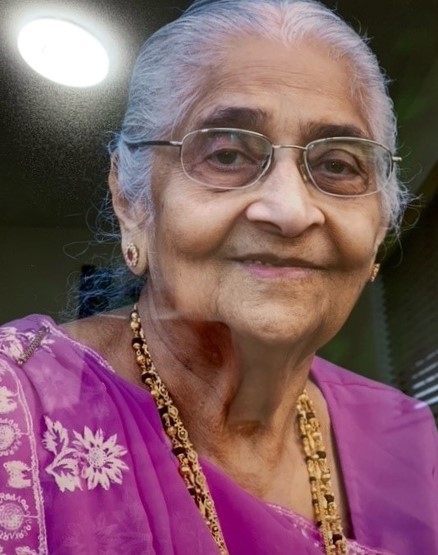 Laxmiben Dahyabhai was born on August 26, 1931, in Dhamdachha, Gujarat, India to Vasanji Hargovind Topiwalla and Jeliben Ratanji Narottam.  She was the eldest of 12 siblings – 9 brothers and 3 sisters.

In 1941, her parents moved their family to Zanzibar where she helped raise some of her siblings.  In 1946 their family returned to India.

In early 1948 at the age of 17 she married 26-year-old Dalpatram Dahyabhai and moved to Fiji.  There she had 3 children, Arvind, Harish, and Jayshree.

In 1957 Dalpatram sent her to India with their children with the intent of eventually moving to England.  But life had a different destination planned for them.  In 1960 she returned to Fiji with their children.  She looked after their children and was the caregiver for her father-in-law until he passed away.

In 1964 Laxmiben’s husband moved to Canada.  While he began his settlement in Vancouver, she spent a year in Fiji looking after herself and her children.

In 1965 Laxmiben travelled on the Oriana Ship from Suva, Fiji to Vancouver, British Columbia to join her husband. Their nuclear family was finally together.

Laxmiben was a pioneer. She supported the immigration of her husband’s family (the Dahyabhai’s), her family (the Topiwalla’s) and many others on their immigration journey following their arrival in Vancouver.  She cooked, fed, and opened her home with open arms and heart.  She was a mother-figure, a pillar in her family and community.

To some of her siblings and their spouses she was not only “Ben”, meaning elder sister, she was a mother-figure, their best friend.

Laxmiben was generous, spirited, energetic, enthusiastic, joyful, sincere, loving, and radiant.  She was powerful, fierce, strong, determined, a lioness, but a softy at the same time.  She was loveable, huggable, and squeezable.

In May 2015 she had to leave her home and move to a care home as her dementia took over.

Laxmiben passed away peacefully on January 6th, 2023.  She leaves behind her sons Arvind and Harish, daughter Jayshree, along with their spouses Uma, Aruna, and Kanti, her 4 grandchildren Bhaveena, Jaison, Nikesh, and Dipika, along with their spouses Gaurav, Hemangini, Shweta, and Sameet, and 5 great-grandchildren Shiv, Dev, Nilay, Arya, and Rishi.

Laxmiben will be remembered for her welcomeness, her love towards her family and friends, her togetherness, warm heart, and her smile.

Laximasi will always be remembered for her sweet smile and infectious laugh. Sending Love to all family members at this difficult time.

My dear Kaki your gorgeous smile will forever illuminate our hearts and the memories we made together will fondly and eternally remain with us. Shine bright my 'sundar' Kaki as you always did. Will miss you. Om Shanti Shanti Shanti Om 🙏

Laxmi Kaki, you were amazing! We had so many laughs and jokes, even when we couldn't understand each other! Haha! Your humour and your laugh were infectious, you always wanted to feed me and I will always remember your voice. Thank you for looking after me when we stayed with you. Fly high with the rest of the angels! You, Dalpat Kaka and my Mum and Dad will have a riot up there! Rest In Eternal Piece, Jani X

I never had the pleasure to meet het but she sounds like an amazing person that lived a fascinating journey through life. R.I.P🙂