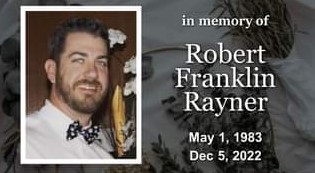 On Monday, December 5, 2022, Robert (Rob) Franklin Rayner passed away unexpectedly at the age of 39. He was a loving son, brother, partner, father, uncle and friend.

Rob was born on May 1, 1983, in New Westminster, BC and grew up in Port Coquitlam. He also living in Langley, Pitt Meadows and Maple Ridge.

Rob leaves behind his partner Sheena, son Jaxen, daughter Tennessee and stepson Jayden. He is also survived by his mother Marcia and stepdad Jim. His sister April, her husband Jonathan and their son, Ryder and daughter, Lena. As well as half siblings Matt and Kelcy. Sharing the loss are also stepbrothers Jamie, John, Dan and their families. Rob was predeceased by his loving grandparents Frank & Lorraine, and sister Colleen.

Rob and his best friend / business partner Michael founded Reliable Waste, where Rob dedicated the last several years of his career. Rob was proud of Reliable, and even welcomed Jayden as an employee in recent years.

Towering above most of his family and friends at 6’6, Rob lived a life as large as he was. He loved hunting, snowmobiling, spending time at Pitt Lake and Saturna Island, and being surrounded by his family and friends. He had a large circle of friends, with many of those friendships lasting well over half of his life. Rob was so proud of his kids – he was Jaxen’s archery partner, Tennesse’s superhero and Jayden’s biggest lacrosse fan.

Rob was so loved, probably more than he ever knew, and will be missed for an eternity.

A memorial service will be held on Saturday, December 17th at Maple Ridge Alliance Church (20399 Dewdney Trunk Road, Maple Ridge BC) at 1:00pm. There will also be a live stream of the service at this provided link https://youtu.be/0Rc9q7tYga8

In lieu of flowers donations can be made to BC Childrens Hospital Foundation.